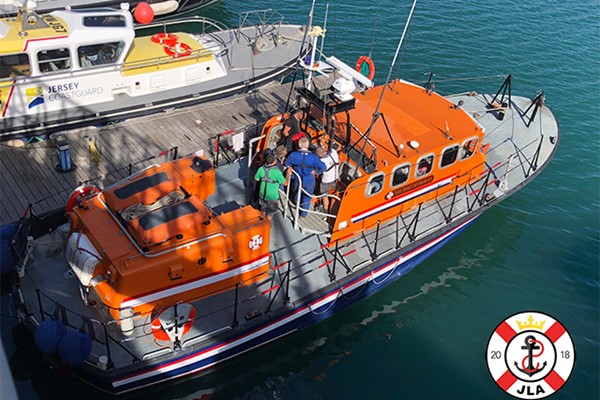 It is incredible to think that the Jersey Lifeboat Association is already two years old – and what an eventful two years it has been. We have premises on Albert Quay, a lifeboat which is an integral part of Jersey’s Search and Rescue Assets (SAR), and we will soon have an inshore rescue vessel to strengthen our resources.

We are very much Jersey to the core. Strongly independent with an overriding sense of community and fair play. Our ambition is to build a lifeboat charity that has the most experienced crew for local waters, delivers to the highest standards, and where all donations stay in Jersey.

After our crews’ very Public Dismissal from the RNLI, the Jersey Lifeboat Association was founded.  With no paid staff, and a blank sheet of paper we started with nothing and no money, but the most important thing we could (and did) have was a united crew – something that money can’t buy.  We also had fantastic local support for our cause.

Despite all the broken promises, we pushed on.  As difficult as it was (sometimes it felt impossible) and with the help of many we managed to pass through the Royal Court a fully registered Jersey Charity dedicated to saving lives at sea.  And so the Jersey Lifeboat Association came into being, with one thing key to it’s heart:  that every penny raised will stay in the Island. Nobody was ever going to take Jerseys Lifeboat again.  We could not have come this far without our dedicated volunteers and the support of the people of Jersey.

Early in 2018, we were contacted by a private seller who understood our plight and offered us the chance to buy a Lifeboat that they had purchased. Sir Max Aiken III was a TYNE class Lifeboat, known very well to our Coxswain Andy Hibbs.  Yes, it was old but it was a slipway boat from Bembridge and thus was extremely well looked after. There was no covenant on this boat (despite what was reported in the local press).  After several months of negotiating, we secured Sir Max Aitken III.  This was integral to getting us up and running.  After many surveys and works carried out, we brought Sir Max back through the Norfolk Broads and down the east coast to her new home here in Jersey.  Even in bumpy conditions, she never missed a beat and we arrived back in Jersey to a fantastic welcoming party, and feeling extremely proud.

Once back the work started and Sir Max had to undergo extensive works to pass the coding survey which was required as part of the declaration process. After a lick of paint, a few stripes, her engines serviced, pumps stripped and rebuilt, tanks cleaned and much more, we finally launched on 28/09/2018.

We were finally able to get training, but the real work started with the very daunting task of working through the pages of the declaration check list.  We set out with one thing in mind: to do it better and more comprehensively than we had before. Thousands of hours writing policies, risk assessments and other documents which all had to then be vetted and checked by a team at Ports of Jersey and an Independent Authority in the UK, dedicated to checking every word of every document.  This was an extremely difficult process for us all and it was like sending our homework to the headmaster for marking.

The whole crew had to train on every part of boat operations and first aid. We were trained by Saviour Medical – a private instructor who has trained the JLA crew to a level above where they were at with the RNLI.  In April 2019 the JLA was declared a fully operational and compliant, registered lifeboat service and we received much praise for the work we had completed. They even admitted they never thought we would make it! We had 16 calls from April to December (one of them being our own Andy Hibbs nearly sinking and having to be towed back by his own Colleagues)!

Without doubt none of this would have possible without the support of our Fundraisers, Ben Shenton our Chairman, our Council members, our Doctors and Crew who keep it running smoothly and of course the Public who fund us.   We are now looking forward at a new inshore lifeboat that we are hoping to purchase, having sea trialled a couple of Ribs. One is used by our special services and we are going to trial another two in the next few weeks. This will ensure we are a fully independent station…. at a cost of over £200k, it does not come cheap. We have also been accredited into the IMRF international family, (International Maritime Rescue Federation) as being the newest fully declared rescue service in the world….. not bad for little old Jersey.

A word from Ben Shenton:  Chairman of the Jersey Lifeboat Association

“Training, compliance, procedures, accounting, administration, maintenance, – these are just a few considerations when forming a charity. It certainly caused sleepless nights – especially as not everyone was on our side.

My involvement stemmed from a desire to ensure that an experienced St Helier Lifeboat Crew, and a team of loyal volunteers, got the outcome that not only they deserved but also the outcome they were promised – a Jersey Lifeboat Association. There are over 70 independent lifeboat stations operating throughout Great Britain and Ireland and we have received a great deal of support from our independent colleagues. We have also received assistance from Ports of Jersey and have built a good working relationship with the other emergency services.

I often get asked why we exist at all, and why Jersey need another lifeboat charity when we already have a UK charity operating over here. Sadly the Government won’t sanction an independent inquiry as they were complicit in the events that led to where we are today. In fact they were actively working with the UK charity against the Jersey volunteers.

However we are where we are. The JLA is here to stay. We are concentrating on moving forward to realise fully our ambitions of educating and saving lives. We are independent, we are Jersey, and like the Parish system, we are here to stay. Thank you for your support, you won’t regret it!”