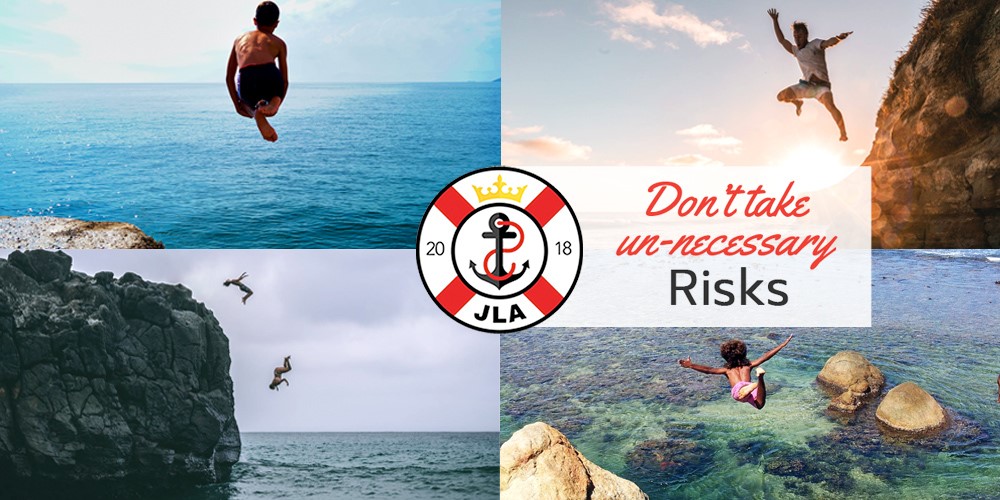 With the temperature rising, it’s so tempting to want to get in the water, but it needs to be done safely.

“Tombstoning” has become a controversial activity. Similarly, cliff jumping when not part of an organised party with equipped and trained professionals present is not without its dangers. There are risks from hitting the water at great height, water depths, submerged hazards, currents and tides and cold water shock. There have been many tragic accidents reported as a result of tombstoning, and as such we ask everyone considering practicing this activity to familiarise themselves with the Harbour Master’s General Direction 3 – Diving and Swimming, available on Ports of Jersey website, link here.

Ports of Jersey has this very sensible message for anyone wanting to take part in coasteering, cliff jumping and tombstoning:

– Always ensure that you have the correct safety equipment, which includes a Personal Flotation Device, wetsuit, helmet and suitable footwear.

– When jumping into the sea from any height, take extreme care to ensure that there is sufficient depth of water with no hazards such as submerged rocks.

– The tides, particularly in Jersey, move extremely fast with strong currents around the coast of Jersey, so ensure you have the necessary experience, as areas quickly become unsafe to jump from. Just because you have jumped from a location before, doesn’t mean it will be safe the next time.

Find out more about the safer (if done properly) activity of Coasteering by clicking here.

Coasteering: The facts
In Jersey alone, there have been numerous injuries sustained from tomb stoning:

2018
A man was knocked unconscious after jumping into the sea from rocks in St Brelade. The lifeboat was called out, however he was rescued by a passing boat and picked up on-shore by paramedics.

2010
A 15-year-old was knocked unconscious and broke his back after jumping from Bouley Bay’s pier. He had to have metal bars inserted into his spine and it took him many months to recover.

2012
A major rescue operation was launched after a 20-year-old man broke his ankle while jumping from rocks near the desalination plant at La Moye. At the time it was reported that he landed on a rock that as covered by around three metres of water.

In 2011 Jersey Tourism was forced to remove an invitation to potential tourists on their website to try illegal pier jumping into harbours – an act which is punishable by a fine of up to £500.

We want everyone to enjoy our beautiful island, but above everything we want everyone to stay safe: locals and visitors alike. Ensure that you enjoy activities such as coasteering safely by only taking part via a reputable organisation who are properly trained and equipped.